Mon Numero 10 is part of the perfume “By The Numbers” series that legendary perfumer, Bertrand Duchaufour, made for L’Artisan Parfumeur. In a nutshell, he created ten fragrances in 2009 as a one-time exclusive deal for customers, each of whom would essentially be getting a bespoke, unique fragrance. Only one bottle was ever made for each of the perfumes and at the cost of $10,000. (NST says it was $20,000 each!) Two years later, in 2011, L’Artisan came out with slight variations on eight of those bespoke perfumes for the general masses with certain numbers in the line being exclusive to a particular city and/or retailer. Mon Numero 10 is New York’s perfume and exclusive to Barney’s which sells it world-wide for $200 for 3.4 oz/100 ml. 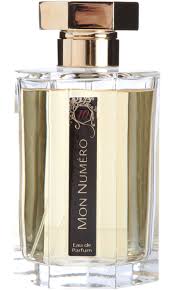 Fragrantica as an oriental. There, as elsewhere, no perfume notes are given; you see only leather and amber mentioned as a general sense of the perfume. I did manage to find a full list of notes on Perfume Niche (which also is the only place I found to sell samples of it, priced at $5 a vial). The perfume contains:

Mon Numero 10 opens on my skin with an incredibly strong note of what can only be described as Cherry Coca Cola. (Perhaps Cherry Dr. Pepper or cherry root beer? It’s something in that family.) Once you have that mental association in your mind, it’s hard to shake off. Immediately on the footsteps of that main note are incense and roses. There is also a strong presence of geranium, especially the fuzzy green, leafy parts. In the background, there is light musk and amber, with a faint touch of vanilla. The perfume is sheer but heady and strong.

As time passes, Mon Numero 10 turns into a very musky Cherry Coke with some

animalic notes. There is leather, incense, musk and boozy amber, but still under the umbrella of Cherry Coke. Or perhaps it’s closer to root beer now? I can’t get the impression of an 1950s soda fountain out of my head. The perfume is — like all Bertrand Duchaufour creations, superbly well-blended — so different notes only occasionally rise to the foreground but there is no getting away from that initial soda impression. On me, the leather notes are very subtle; the incense and musk are far more predominant. During the final stage, Mon Numero 10 becomes quite lovely: incensed rose with amber that is just barely boozy but always rich. It’s like a sheer veil just touching my skin.

The perfume’s sillage is like that of all L’Artisan fragrances that I’ve tried: low. It’s sheer and has little projection, becoming close to my skin after thirty minutes. However, as an eau de parfum, it has much greater longevity and presence than many of the brand’s perfumes (which are often in eau de toilette concentration). All in all, Mon Numero 10 lasted about eight hours on me.

I enjoyed the dry-down, especially the incensed amber notes, but I wasn’t crazy about the scent as a whole. My experience was slightly similar to Angela from Now Smell This who found the scent to be “leather cola” or Coke over the leather seats of a Bentley. She found it to have the “forceful, stylized demeanor of Joan Crawford in the 1940s” — which I can partially see. Something definitely feels a little retro and stylized about it. In contrast, one commentator just found it to be like “horse liniment.” I’m not sure that’s better… And, the two reviews of the fragrance on Fragrantica, are definitely not passionate raves. On the positive end, Birgit from Olfactoria’s Travels gave a whiff to all the scents in the line at the store; as an initial impression, she enjoyed Numero 10 the most. I have no idea if she tried it beyond that and ended up loving the scent. [Update: I am informed that she subsequently ended up hating it.]

For $200 a bottle, this is not a fragrance that I would recommend.